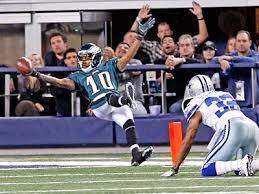 Desean being Desean against the Cowboys.

It all comes down to week 17; win and you’re in the playoffs. By all accounts the Eagles should win this game, and win it handily. The Birds are better in all aspects of the game with the exception of special teams. The Eagles currently rank in second place in offensive DVOA with both rushing and passing ranking ahead of the Cowboys. On the other side of the ball, the Eagles also rank better in defensive DVOA against the run and pass than the Cowboys. The Birds strength on the defensive side of the ball is their run defense which surprisingly ranks 12th in the league. This matches up with the Cowboys’ strength on offense; they currently ranked fourth in rushing DVOA.

All of the advantages the Eagles have will be amplified with Romo out for the year following back surgery. His replacement, Kyle Orton, doesn’t have the requisite skills to beat the Eagles defense.  Kyle Orton doesn’t have the arm strength to beat the Eagles secondary over the top. His career yards per attempt, 6.61, ranks in the Sam Bradford or Alex Smith zone. Kyle Orton is not Matt Cassel.  Orton also lacks the mobility and pocket savvy of Romo to extend plays and avoid sacks. Despite radio hosts on ESPN’s 97.5 The Fanatic claiming that Kyle Orton improves the Cowboys chances of winning that simply isn’t true. Orton is a backup for a reason. This is the same guy who got benched in Denver in favor of Tim Tebow.

I personally don’t like Tony Romo, but he is unfairly vilified in the media for, “coming up short in big games” or “choking in the fourth quarter.” This is in spite of the fact that Romo was tied for the league lead in fourth quarter comebacks in 2011 and 2012. He has four fourth quarter comebacks in 2013, accounting for half of his teams wins. And for those among you that claim that he’s more turnover prone than Orton, Romo has an over 2:1 TD to INT ratio for his career, while Orton’s is 1.4:1. Additionally, Romo is having one of his best season’s avoiding turnovers, with an interception rate of 1.8 for every one hundred passes. For Orton’s career he posts an interception rate of 2.5 per 100 pass attempts. All of the arguments that favor Orton giving the Cowboys a better shot at winning this game aren’t based in facts; instead they are based in the narratives that the media loves to perpetuate.

The way the Eagles can take advantage of having Orton at quarterback is simple. Orton likes to rely on timing throws, and getting the ball out of his hand quickly. By pressuring the receivers at the line of scrimmage, the Eagles can disrupt the timing routes, and give the pass rush more time to get to Orton. Orton’s lack of arm strength also favors the Eagles run defense. Since the likelihood of getting beat over the top is lessened with Orton in the game, the Eagles can run a single high safety, and bring Earl Wolff or Nate Allen up into the box to help stop the run. Expect the Eagles to win this game by double digits. So for those among you that live in the city limits, enjoy the rioting. 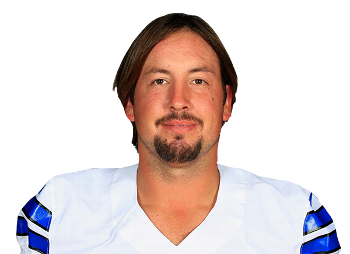 With Romo out, the Cowboy’s are forced to start Karl from workaholics under center.